of the Porterville Seventh-day Adventist Church

In 1914, in the days of the Model T Ford and dirt roads, Mr. and Mrs. G.R. Kuhn and their four children started weekly meetings on Saturdays in their tent house about two and a half miles northwest of Porterville. They invited others in the community to join them. When the weather became hot they moved to the shade of trees.

With the growth of the group of Sabbath keepers and winter coming on, a room at the Morton Street School was loaned to them for a short time until they could find a more permanent location. (The Morton St. School has been torn down to make way for North Main Street.) This was followed by the rental of facilities at St. John's Episcopal Church.

In 1915 Richard R. Breitigam and Fred Brown came to Porterville to hold evangelistic meetings hoping to organize an official congregation. Pastor Breitigam described the effort in his autobiography, Joyful Journey: My First Century with Christ (Breitigam lived to be 106 years old):

"We were able to obtain an excellent location in the center of town, where we pitched a tent which could seat about 275 people. What a challenging experience it was to plan for evangelistic meetings in a busy city, to pitch a big tent, and to see the curiosity of the people as they wondered just what was going to happen. Everything inside and outside the tent was made as attractive as possible. ...At last the evening arrived for the meetings to begin. We stood at the open door of the tent, praying that the Holy Spirit would impress people to come. We each felt an expectancy words cannot express. One by one people began to come, family by family, and before long the tent was filled. While people found their places, my wife played gospel melodies. ...We projected all our songs on a screen so everyone could see both words and music. This was something new in those days. I had more than 50 songs on glass slides. Our special music was also illustrated with color slides, as were our sermons. I had originally purchased slides in black and white, and Iva [his wife] tinted them. They were very effective in presenting Bible prophecy and gospel themes. Often people would remark, 'Everything is so clear.'" (The above picture is of their meetings in Farmersville the next year.)

People returned night after night to hear the gospel preached. The preachers had no transportation except by foot. Breitigam said, "They say walking is good for one's health-we kept very healthy. Iva and I walked the length and breadth of the city, as well as throughout the orange groves for miles around." Remember, this was 1915.

As a result of the gospel meetings 40 people joined the small group of Sabbath keepers and a congregation was officially organized on December 25, 1915. They rented a hall in which to meet.

Mrs. M.H. Compton purchased the land and lumber with some inherited money. (The grant deed was recorded in the Recorder's Office of Tulare County on August 6, 1917. To make the transfer legal the deed shows she was paid $10.00 in gold coin.) The men worked together to build their first church on Villa Street west of town (in the first block North of Olive Avenue). The building and lot cost around $600.00. The building was used for both their school during the week and their church on Sabbaths. It was completed early in 1918.

When they outgrew the church on Villa Street they traded it for a vacant a lot at the corner of Oak and Fourth Street. The church was built by sacrificial donations and donated labor. The $1,800 for the lot and a total cost of $5,664 seems inexpensive by today's standards but it was a real challenge for the members in 1938. The church and Christian school were dedicated debt free on March 23, 1940. 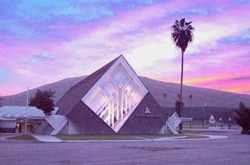 Again with a growing congregation the group bought land at the present location north of Porterville, on Linda Vista between Main Street and Highway 65. They started construction about 1964 under the leadership of Pastor Broderson and building committee chairman, Dr. Jack King. It was dedicated in 1967 under the leadership of Pastor Roy Henneberg.

The dedication of the members through the years is humbling to us today as they stretched beyond their means to provide a comfortable place to worship. May we have the same dedication to our community and to God.

We use cookies to personalize content and ads, to provide social media features, and to analyze our traffic. We also share information about your use of our site with our social media, advertising, and analytics partners.